Ancient Philosophy and the Origin of the Universe

I. Sometimes our modern understanding of things can be informed by how people long ago thought about the same things. Just because they didn’t have electricity or microscopes doesn’t mean ancient people were any less intelligent. Human beings have a long pedigree of figuring out amazing things with very limited resources.

At least the stuff Aliens didn’t teach us.

II. When we think of ancient Greek philosophers, the likes of Socrates, Plato, and Aristotle appear in our heads.

These philosophers, though famous, were not the first. When it comes to lovers of knowledge in the city of Athens, all owe a debt to a man named Anaxagoras. He was the first to bring the new art of philosophy to Athens, paving the way for the rock stars of ancient philosophy that would steal the show later on. Anaxagoras arrived in Athens in the Fifth Century B.C. with some funny ideas about the Earth and the Stars and all of Existence. Unfortunately, none of his original work survives, and we only know what he thought from fragments of his writing preserved in the work of others.

Still, we can glean a general understanding of his views. Anaxagoras had the groundbreaking belief that the Sun and the stars were giant, burning chunks of rock or metal. They don’t burn us or scorch the Earth because they are infinitely far away. He also posited the theory that the moon, too, was made of good old solid rock.

These ideas are not completely spot-on. The Sun is actually burning gas, not metal. But at least he didn’t believe the Sun was an evil hunter that was constantly chasing down the poor, victimized moon.

Bonus Points if you get this Joke!

However, Anaxagoras also believed the Earth was a flat disk that floated on a cushion of air, like a puck on a cosmic air-hockey table. So you win some and you lose some, but we can cut the guy some slack for not understanding all the intricacies of geology. The ancient Greeks made up geology, after all, and there was probably a steep learning curve.

The most interesting theories of Anaxagoras are those concerning the beginning of time and the origin of everything.

Anaxagoras believed that everything has always existed, but not in its current form. At the beginning of time, all matter was mixed together in its simplest state. While everything existed in this mixture, it was not evenly spread out. There were higher concentrations of substance A in one area, and substance B in another.

At some point this mixture was sent spinning, and like a centrifuge it separated out the different ingredients leading to clumps that would lead to earth and water and clay. He claimed that eventually living creatures arose from this clay. That’s probably not exactly how life first arose, but it’s more of an answer than modern science can currently provide. Anaxagoras believed everything we see, feel, and experience had its origins in a cosmic primordial mixture which increased in complexity as time went on and things spun around. It’s a pretty cool idea, but is it just that? An idea? Or could there be something more to it?

III. By the early 20th century, we had come a long way in understanding exactly what is out there in the Universe. Physicists like Vesto Slipher and Edwin Hubble discovered evidence that distant stars and galaxies are not fixed in space, but are actually moving away from each other. These observations proved that the Universe is, in fact, expanding. The term, “Big Bang Theory,” was coined by Fred Hoyle in 1949 to describe this phenomenon and explain a possible cause for the expansion.

The Big Bang Theory claims the expanding universe had its beginnings in a single point in space. This point singularity contained everything that ever was, is, and will be. At some point it could not contain itself anymore and Existence spilled out into the surrounding nothingness.  Sort of like when a fat person’s pants rip when they can no longer contain the girth.

According to modern cosmology, immediately after the Bang everything was mixed together in what is often called a, “quantum soup.” At this point, there were no elements and no atoms. There weren’t even protons and neutrons and electrons yet, but only the smallest building blocks we are aware of called quarks and leptons. These impossibly small units were floating around together in a hot mess, but it was not a completely homogenous mixture. Some areas had higher density than others leading to clumps of quarks and leptons that would become the seeds for more complex structures.

Waiter! There are lumps in my Quantum Soup!

How do we know this? Its all right there in the Cosmic Background Radiation, which is basically a giant snapshot of the baby universe that exists far, far away at the edge of known space. I don’t see it, but I could never get Magic Eye, either.

As the force of gravity acted on the denser regions of the soup atoms and elements eventually formed and grouped together. They became concentrated enough to collapse under their combined mass and form the first stars.

But in the midst of these local collapses the Universe itself was still expanding. This provided enough cool space for groups of stars to form galaxies with the right conditions for main-sequence stars like our sun and special little planets like our Earth.

IV. The Big Bang Theory and the cosmology of Anaxagoras are remarkably similar for being thousands of years apart. Both claim that everything has always been, and both claim that the story of the Universe is a story of increasing complexity as the result of a non-homogenous mixture.

Both theories also require the presence of a phenomenon we can’t completely explain. For Anaxagoras, it was the thing that set the primordial mixture spinning. For modern cosmologists, it is the constant expansion that appears to defy the rule of gravity.

For Anaxagoras, the mysterious force was something he called the nous or mind. At some point a grand cosmic intelligence got bored and started spinning the mixture. 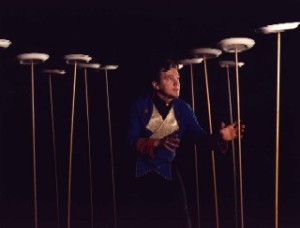 Modern cosmologists explain the expansion with a force called dark energy, which is the theoretical force exerted by empty space. According to this model, the push of dark energy is just slightly stronger than the pull of gravity. Things that are relatively close together like atoms and solar systems are held together by gravity.

But as the space between things increases, like the distance between stars and galaxies, they have a more difficult time staying together and are eventually pulled apart completely, being propelled further and further away by the cold space between them.

Dark energy: A metaphor for divorce?

V. Human beings have come a long way in their understanding of the Universe. We can trace everything back over thirteen billion years to within less than a nanosecond of the beginning. But we can’t quite get there, and are left with the same question that puzzled us more than two thousand years ago.

What got the whole thing started?

Whether the Universe was set in motion by a grand cosmic deity or pushed around by the force of nothing, both options sound awfully mysterious to me. We’ll all just have to play golf or something

← The Heirs of Byzantium
On Being Young in an Old World →

One thought on “Ancient Philosophy and the Origin of the Universe”