Nothing to fear but Fear itself. (And Monsters…)

Fear is a natural part of life. Like many other natural parts of life, fear is something we would like to avoid sometimes. It is one thing to go see a scary movie. It is something completely different to stumble across a lion in the wild. 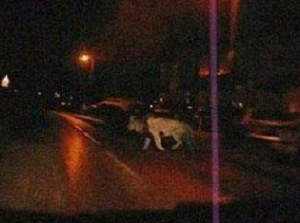 Or even worse, the city.

The ability to be afraid is one of many gifts of evolution, like opposable thumbs or male pattern baldness. Our distant ancestors were a prey species. It was, and still is, a delicacy for a predator to get ahold of some tasty primate. All living things experience fear, but prey species are its best practitioners. That’s why deer are so flighty.

Either that, or they think they’re better than you.

When creatures are afraid they are also more aware or their surroundings. Neuroticism is the price one pays to not be dinner.

There are two basic types of rear. Fear that is well founded and based on fact, and fear that is irrational. One of these types of fear is actually more useful than the other. But it might not be the type you think.

We are all familiar with rational fears. Maybe you are afraid of oncoming traffic because it is fast and dangerous. Or maybe the dentist is a source of fear because he hurts you and then makes you pay for it. Whatever it is, there are plenty of real things to be afraid of in the world. The greatest real-life fears are more abstract than a common predator or uncomfortable situation. Perhaps you will get sick, or a loved one will die. Maybe there is a chance the factory will close and you’ll have to sleep on the street. And, above all, there is the looming specter of mortality. These are the fears that keep up us at night. We can fight a bear, or avoid bullies, but there is nothing anyone can do about death or misfortune.

This is where rational fears can get us stuck. It makes perfect sense to be worried about death and its coterie of terrible things. At the same time, it is pointless. It is like constantly fretting about your height. You’re not going to get any taller, so you should spend that energy working on something else. That’s just what they want you to think!

Irrational fears fall into the same category as superstition. Both can have profound effects on an individual’s life, but in the wider scheme are silly and don’t matter.

Like their rational counterparts, irrational fears are often things we have no control over. Even if the mice are actually plotting to overthrow the house and make you live in a little hole in the wall, there isn’t a whole lot that can be done to stop them. If clowns are really coming to eat you, there is nothing to do but wait in a tub of barbecue sauce for them to arrive.

Locks are useless against clowns.

It may appear that fearing things over which we have no control is completely pointless. It might be better to take a stoic, zen-like approach. After all, what good does it do to be afraid?

The truth is, unless you are some kind of demi-god, you will be afraid many times in your life. Sometimes the fear is over something silly and beyond your control, like aliens. Other times it could be something real, like an axe murderer or a hereditary heart condition, but you still have no control.

And then, on a few rare occasions, you will be faced with a terrifying situation where there is actually something you can do. With all that practice worrying, you have a better chance at not being paralyzed by fear when that moment comes. The only thing a predator likes more than a scared animal is an animal that is too afraid to do anything at all.

Don’t trust anyone who tells you to play dead.

We cannot choose to simply never be afraid. We need the practice. But we can choose what we are afraid of. In the end, fearing that death will come and take away grandma in the night provides just as much practice as being afraid of robots rising up and conquering humanity. If I have to be afraid of something, I want to choose the thing that is scary and fun. Instead of just scary and depressing. In this case, irrational fears beat rational fears just about every time.

And when you are inevitably faced with something real it won’t seem so bad. What’s a wild animal or a terminal disease when you were preparing for an alien invasion?

Unless you see this, you’ve got nothing to worry about.

← Strategy and Morality
How to Get Ahead →

2 thoughts on “Nothing to fear but Fear itself. (And Monsters…)”