“The pen is mightier than the sword.” This is a statement we used to hear a lot in the English-speaking world. It is a phrase that implies words and culture are more powerful than brute force.

Some say it is an absolute truth. Of course culture is better than strength. Others say this is little more than wishful thinking on the part of people without swords. I am not sure where I stand. I like the phrase, but I’m not sure it is true. This makes a perfect case for further examination.

Although, “the pen is mightier than the sword” is a metaphor, it may be helpful to first consider it literally. All good metaphors are based in truth. Let us directly compare pens and swords as physical objects. Is an actual peen indeed mightier than a real sword?

We should assume we are talking about a perfectly normal pen, like a Bic ballpoint, and an equally normal sword. No loopholes. No lightstabers or swords made of glass. No pens that are actually spy-gadgets. 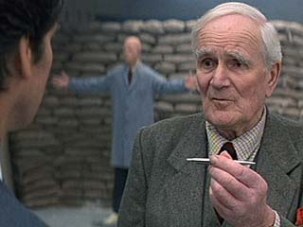 Obviously a real sword is mightier than a pen. A sword can easily smash a pen into tiny pieces, and only risk getting ink all over the place. A pen could do some physical damage to a person, but not nearly as much as a sword. If you are defending against a sword, it is probably wise to grab a sword, and not a pen. If someone is attacking you with a pen, you should still use a sword.

Or maybe a pen protector?

Not all conflicts are resolved with violence, though. In fact, violence often leads to more problems. Few reasonable people want to lug around a heavy piece of steel all the time. That can get tiresome. Also, pens are clearly more important than swords in regular life. They are ubiquitous. If you are within civilization, then you are never far from a pen. When was the last time you saw a bunch of swords just lying around?

In the literal sense, the pen is not mightier than the sword. But it is just as useful, in its own way. And then pen is certainly more convenient.

If the pen is not literally mightier than the sword, does that expand to the greater metaphor? The supremacy of culture over strength is a cornerstone of modern Western civilization. What does it mean if it isn’t really true?

Will Santa still bring me presents?

Deep down, everyone knows that culture isn’t really more powerful than strength. That would almost go against nature. By insisting the pen is mightier than the sword, we set ourselves up for disappointment when someone comes along and breaks our pen.

But nobody wants to live in a world where everyone is breaking each other’s stuff all the time, just to prove who is the mightiest. That sounds more like Thor on Asgard than humans on Earth. In that world, defeat always equals despair. And the only prize for victory is paranoia. Not a fun place at all.

But the view is OK. I guess.

Intelligent people eventually learn that fighting all the time just isn’t always worth it. There are times when you really need to stand for something. There are more times when it is easier for everyone to just get along. It is easier to draw up documents, and come to agreements. And to sign those agreements with pens. Not swords.

Culture does not, by default, defeat strength. But it is really the easier option. The pen is not mightier than the sword, but it is certainly more convenient.

I really would rather have a lightsaber anyway.

← Preferred Source of Noise
The Root of All Evil →