Mastoiditis is an infection of the Mastoid process. The spongy bone behind the ear. It is like an ear infection on steroids, with all the associated pain and pressure. It is the type of affliction that results in a horse-sized needle of antibiotic being shot into your butt.

Even though it can be severe, Mastoiditis is really just an ear infection. I have had many of these, and while I cried about the pain, I have never been afraid of an infection. Ear infections might hurt, but they’re not gonna kill me. Not in 2015. In America. I was more afraid of driving to the doctor than I was of the actual ailment.

“I don’t understand these forms. Can I just die instead of filling them out?”

One hundred years ago, had I developed an ear infection, things would not be so breezy. In the past, simple ailments were cause for worry. There were no antibiotics to whisk away a pesky infection. It is likely an ear infection would have killed me. It would have been difficult to cry about pain and insurance back then. It’s tough to think about anything with death looming so close.

A century ago I would have developed an ear infection and quietly died. But it wouldn’t be a big deal. It would be sad, but not tragic. People died from simple things all the time back then. They still do in parts of the world. People died, and everyone else had to go on knowing death could come for them at any moment. Over something stupid.

“Today we bury Jim, who died of a paper cut.”

We often look at our ancestors and say, “They were so tough. They built roads and nations. They struggled against nature, and fought other people. And they never seemed to be afraid of anything.”

But it was easy for them to be tough and fearless. They never had a chance to be anything else. Economic crashes, sickness, spiders, aliens. All the things that keep us up at night today were nothing to our ancestors. It is difficult to be afraid of trivial things when you hang around with death all the time. 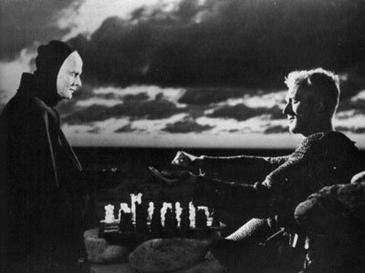 Like that creepy kid your mom made you play with.

People become acclimated to a certain level of peril. A tightrope walker is less afraid of heights than a miner, but might be claustrophobic. For a frontier settler, or a third world peasant, the greatest and most pressing fear is imminent, unpredictable death. Whether from roaming barbarians, relentless famine, or simple infection. And this fear never went away. There were no reassurances. Death was there, and people had to think about it.

As a modern, western person, I have been fairly insulated from death. Old people die, but you can see that coming, and I am still young enough to think that won’t really happen to me. People die of sickness and accidents, but those incidents are few and far between. It makes death seem patchy, rather than the thick blanket it is in reality. I am a stranger to death, and so it terrifies me. Thankfully, I don’t have to think about it all the time.

Modern people are lucky they don’t have to face death every day. However, when we finally do, it is a rude awakening. A life that is estranged from death has a greater chance of being corrupted, twisted, and destroyed by its approach. Everybody dies, and many of us are babies about it.

I am afraid of a lot of things. Aliens, people, cars.

Would I trade this feeling of mortal security for a more stoic attitude towards death? Probably not.

When it is time for me to go, will Death the Stranger cause me to scratch and wail and ruin everything I’ve lived for? Maybe.

Or maybe my mind will be successfully uploaded into an immortal, robot body. Then I will be invincible, fearless, and stranger to death!