How We Treat Those Below

It is easy to be nice to people who are above you. After all, that is how people get by in the world. If you aren’t nice to the people above you, they might drop things on your head!

It’s easy to treat your employer well, because you need a job and maybe would like a promotion someday. It’s even easier to be nice to people who are bigger or more powerful than you are. You will probably be punished if you are not. Self-advancement and self-preservation are both powerful motivators for appropriate behavior.

Being nice is essentially the same thing as being polite. And being polite is really just behaving with manners.

Behaving politely, or using good manners, is like a manifestation of care. It shows you understand the world is full of people, and you would like to get along with them. Using manners shows you appreciate the world. It is a great way to express gratitude and humility. A polite person with manners is infinitely more valuable to society than a rude person without. If you want to have a positive impact in your time, then start by being polite.

Of course, you should always be polite to other people. You should be polite both towards those above you and those below. Even though it’s difficult, you should even be polite to people who are rude. There is something obviously wrong with rude people. They can’t help it. I feel sorry for them.

Someone in this picture is being rude, but I can’t tell who!

Even if you are at the bottom rung of society, there are still creatures below for you to be nice to. Every human has more influence than any animal. A good person should be polite to animals, within reason. You don’t have to hold the door open for a raccoon. It probably just wants to poop in your house anyway. But you don’t need to kick the raccoon, or try and hit it with your car just because it can’t ask you to stop, and probably can’t afford a lawyer.

Don’t destroy spider webs just because they are there. Try not to yell at birds, even when they wake you up in the morning. Treat your dog like he has feelings. You know he would do the same for you. 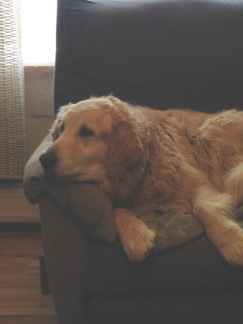 Actually, my dog is quite rude. He doesn’t care.

This is where I might lose some people, but I am beginning to believe you should be nice to machines, too. What could possibly be lower on the scale of influence than a thing with no will that was made to serve humans? Machines are like slaves, only without all the moral incongruities.

I know it doesn’t care, and doesn’t even know, but I feel bad when I yell at my car or my computer. On the other hand, I said “thank you” to an ATM the other day and felt really good about myself. As soon as I was done feeling stupid.

It makes sense to be polite to things that make your life easier. Not for the thing’s sake, but for yourself. This doesn’t mean you need to make small talk with your doorknob to feel like a good person. It just means you should feel bad if you smash and kick and yell at your washing machine. That is very rude, and rude people are bad people.

Not to mention, being nice to machines might serve you well, just in case there is some kind of robotic revolution in the not-too-distant-future. Maybe the new overlords will remember that you were always polite, even when you didn’t have to be.

“Always say please and thank you, tiny humans. OR SUFFER THE CONSEQUENCES!”

And now, I find myself wondering if I’m not as polite as I think, for I have been walking upon the Earth my entire life, and never even stopped to say, “thanks.”

← What Type of Gamer is God?
Meditations on Acne →