If perception determines reality, and words help to determine perception, then words have the power to shape the world. It is a great power, one that anyone with a voice or a pen or a keyboard can wield. Many of us do not use this power responsibly.

Spider-Man would be disappointed

This ought to be obvious, but I will say it anyway: Part of using power responsibly is using power correctly. Being responsible with words includes actually knowing the meaning of the words you use. You could say this is using words the “right” way. I would prefer you say “correct” instead.

The Latin word for “right”, as in the opposite of left, is Dexter. Over time, Dexter also came to mean useful or skilled. As in dexterous.

Modern English, though a Germanic language, has had a lot of Latin influence. After all, it was the fancy language of a powerful empire, and the barbarians wanted to copy it.

When the barbarians heard the Romans say, “the right side is the good side,” they didn’t just take it as an objective statement based on the fact that most people are right-handed. The barbarians incorporated it into their language as, “the right side is the good side. As in morally good. So in modern language we got two meanings for “right.” Right, as in the direction, and right as in righteous, right-hand man, and do the right thing.

“I’ll get to cleaning right away.“

This isn’t just an English-Latin story. Equating skill and moral good with the right side of the body is a phenomenon that occurs across all human cultures. Probably because, as mentioned before, most people are right-handed. It makes sense, but is also a little bit mean. There is another side to the story.

Dexter is the Latin word for right, while sinister is the Latin word for left. This is where the name of my website comes from. If the old word for right came to be associated with good, what to you think happened to it’s opposite? Sinister came to mean clumsiness, and then by extension, just plain old bad. Now, the word sinister is synonymous with evil. People use sinister to describe evil plots and horrible actions. It makes me cringe every time I hear it. I know I probably can’t change this. One worthless philosopher alone cannot redeem the word sinister, but I can still try.

Even if you don’t care about the left-handed, consider this: The standard human’s heart is on the left side of their body. If all evil comes from the left, and all of our hearts are on the left side, then what does that say about humanity? 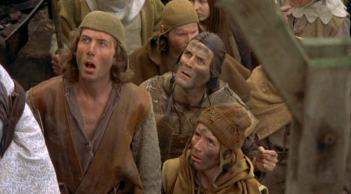 I don’t appreciate when evil things are called sinister. I think we should just call them evil. We should reserve sinister to describe things that are creative or independent, like everyone says the left-handed are supposed to be.

As long as right means right, then left will mean wrong. We cannot allow this false dichotomy to persist. It is incorrect.

That is just my perspective

← Governments are Humanity’s Children
Why Write: 2016 →