Human beings and machines have a lot in common. They can both be used to perform jobs and do work. Unlike humans, machines don’t have feelings. At least not yet. Machines never feel good or bad about the work they do, and they never get sick. Despite their lack of feeling, we sometimes treat machines better than we treat people.

“Don’t worry, Mr. Record Player. Just take it easy and we’ll get you fixed up.”

How many people would expect a machine to keep working after it is broken? Not many. How many people are expected to work when they are sick? Many more.

“It actually takes a lot of work to hold my nose like this all day.”

Going to work when you are sick is pure stupidity in all but the most extreme situations. Lots of people have very important jobs, and it is important they perform at their best. Alas, people who have these important jobs are often the same people who never take sick days. How many bad interactions are caused by someone simply not feeling well? How many problems could have been avoided if someone just stayed home for a few days?

There are a lot of stories about bad interactions with cops. Police officers have very difficult jobs. It would be difficult enough to be respectful to the public and have to deal with all the things a police officer has to see. Add a headache or a stomachache to that picture, and being respectful to the public might become downright impossible. How many mean cops are just feeling sick?

Still, being nice is part of a police officer’s job, whether they want to admit it or not. If they can’t be at least a little bit pleasant about their work, then they should just stay home. The community won’t fall to chaos if a police officer takes a sick day. And if it does, then the police officers probably aren’t doing a very good job anyway.

This is what happens when a cop takes a sick day…

There are people who are responsible for making laws and setting policies. How many of them go to work when they have a cold? Sure, it might prove the indomitable work ethic of the elected official if they work through a sickness, but does anyone really want legislatures deciding the fate of us all when they can’t even keep a meal down, or think straight? How many bad laws exist because the people who wrote them, or approved them, didn’t feel well? How many lives have been affected because someone in power was having a bad day?

It’s not a good idea to work when you are sick. Being sick makes a person irritable and incapable. If anyone understands this, it should be the medical professionals. Yet doctors are notorious for their poor bedside manner. Is it because they are just jerks, or because they are stressed out and don’t feel good? Most people would be upset if their appointment or procedure was canceled because their doctor was sick. I would be impressed.

People shouldn’t perform important jobs when they are sick, and the really shouldn’t perform trivial jobs when they aren’t feeling well. Who hasn’t been “helped” by a rude customer service person. Their employer probably forced them to work though an illness, because their employer is stupid. Making your employee work when they are sick might seem like good business sense. Really, it can only make your business look bad. Chances are the employer doesn’t really feel good either, but they would never admit to such weakness.

“So it turns out we all have the flu. Great job, team!”

If you are the type of person who believes it honorable to work when you don’t feel well, if you expect yourself and others to work when they are sick, let me ask you something; would you drive a car that is broken? If a person is driving around with a flat tire, are they doing to right thing? 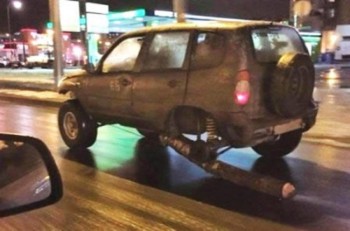 I guess that depends on where he’s going…

← The Speed of Light, and the Best Version of Myself
Theology and Theoretical Physics →