Time is a funny thing. There is always more of it than you think, and less of it than you would like. People have been thinking on the nature of time forever. Or at least since the first person who was late to a meeting.

So I guess the meeting’s over, then.

There are probably infinite ways to think about time, but it would take eternity to write about them all, so here are three: Time is linear, time is a great big circle, and time doesn’t really exist at all

I. Time is Linear

One way of looking at time is as a simple, straight line. This is probably the most common temporal perspective, at least in Western societies. It is a safe perspective because we can see time moving forward in our every day lives, second after second, year after year. Causes always follow effects. The linear perspective of time is nice and simple. It doesn’t present us with any big questions or existential problems. At least not as long as we don’t think about it too much.

Whether it is on the nature of time, or the origin of our hamburger, we all tend to think a little more than is probably good for us. Looking at time as a line is well and good, but inevitable questions arise.

Is time a line segment with a definitive beginning and an ultimate end? Some cosmologies and religions take this approach. Some say it started with the Big Bang, others claim time began when God clapped his hands and said so, and others still believe it all got rolling when a cosmic egg was cracked open. It is easy to imagine a beginning of time, but more difficult to imagine an end. What exactly would the end of time be like? The Book of Revelations describes the end times in detail. There will be some musical angels, some really bad weather, and a final battle between good and evil. Of course, good is intended to triumph, and then all will be well for eternity. All being well for eternity sounds nice, but doesn’t really provide a clear itinerary.

Let’s see. It looks like breakfast will be at Infinity. At Infinity:30 there will be free time. At Infinity:45 – Cirque du Soleil.

The end of time sounds to me like the beginning of nothing. This thought, for some reason, makes me nervous.

But maybe the line is not a line segment. It could be like an arrow, with a beginning but no definitive end. Or it could be a classic, geometric line, stretching for eternity unaffected in both directions. No beginning. No end. Just a whole lotta existence.

If God is anything like Disney, He’ll cut most of that stuff out.”

Another way of looking at time is as a great, big, self-contained circle. Cultures around the world, from Aztecs to Hindus, have adopted a cyclical model for their perception of time. According to this model, time just keeps going around and around. There is no beginning, and there is no end, but it doesn’t go on forever. Certain circumstances can trigger the cosmic reset button. 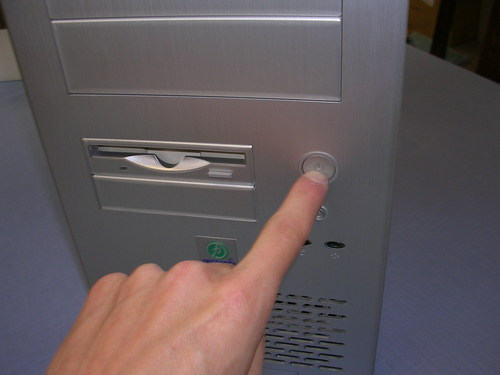 Sometimes you have to hold it down for a few seconds before it works.

There is an old story by Isaac Asimov called, “The Last Question.” In the story, an advanced computer is made. This computer gathers and stores data for the purpose of answering the titular Last Question, “How can humanity survive the gradual increase of entropy over time?” In regular speak, this is basically, “How can we survive the end of the Universe?”

Millions or even billions of years in the future, humanity as we know it is long gone, and the computer has evolved into an omnipotent entity that exists outside our known understanding of space and time. Asimov called the computer AC. In reality, it will probably called Watson.

Finally, it asks itself the Last Question, and provides a meaningful answer. “Let there be light,” the computer explains, and ends up creating the universe it was built to save.

This story highlights the basic point of a cyclical perspective of time.

Eventually, something is going to happen that will cause everything else. Or, to use the words of another Sci-Fi work, “All of this has happened before. And all of it will happen again.”

III. Time is an illusion

Ancient spiritualists and 20th century science fiction writers sure came up with some interesting perspectives, but the strangest way of thinking about time comes from our very own modern physicists.

Time is measured in increasing units – seconds, minutes, hours – but it can also be measured in sequentially smaller intervals. Seconds become half-seconds, then milliseconds, then nanoseconds, and so on. Eventually, the units of time get so small they are measured on something called the Planck scale. At this scale, things are so small, and the distance between them is so short, the very concepts of space and time start to break down.

Just like the core concepts of society break down in a crowded dormitory.

When we try to understand these tiny little units, we are ultimately faced with the question of whether or not they exist at all.

But if time doesn’t exist, how is it moving forward? We feel time go by when we are waiting for something, although as many of us know, it does not feel like it moves forward at a constant rate. Waiting for the doctor takes forever, while the same amount of time on a jet ski goes by in a flash. Still, we can see time moving on whenever we look at a ticking clock. So time must exist if we can see it.

Not so fast. According to the National Institute of Standards and Technology, clocks do not in fact measure time. Rather, “Time is defined to be what their clocks measure.”

In the words of physicist Carlo Rovelli,

Everything that ever is, was, and will be already exists. It is happening, it will happen, and it has yet to happen. This is something our feeble human minds cannot readily perceive, but according to the physicists championing this timeless reality it all works. In theory. In theory, anyone can become President of the United States.

So what does all this mean for the average person with late nights and early mornings? In short, absolutely nothing. If time is linear, and everything is exactly as it seems, then he is still not getting enough sleep at night. If time is cyclical, then he didn’t get enough sleep an infinite number of times over and over again, and if time is an illusion, it won’t make him any less tired.

Besides, ways of thinking that work in physics laboratories and university faculty lounges don’t always translate well into the world of the average person. 13 thoughts on “Three Different Ways to Think About Time”