How to Live Forever

The worst part of knowing you’re alive is the knowledge that you’re going to die someday. People in every generation have thought about this, worried about it, and tried to avoid the inevitable conclusion. That trend continues today.

A group of people, called futurists, believe we are on the verge of a great technological discovery. They believe the culmination of all our knowledge, from fire to nanotechnology, will allow human beings to reach the point where we can transcend death. They call this point, “The Singularity,” because everyone likes to steal their terminology from physicists.

The ability to download our minds into a computer, or medicine that counteracts aging indefinitely, is still outside our grasp. Maybe these powers will arrive someday, along with world peace and transporters. And it will not only be acceptable, but also required to wear pajamas to work.

Life is good in the 24th Century.

But even the people in Star Trek age and die. If they haven’t figured out immortality, then we are still far, far away. In the mean time, we don’t have to wait for the future to try and live forever. People have been struggling against death for a very long time without any fancy, futuristic technology.

The epic characters Gilgamesh and Ragnar Lodbrock, famous people from times remote to us and to each other, show us two possible ways to live forever.

II. The Epic of Gilgamesh is one of the oldest stories ever recorded. It is a tale of irrational determination, and there is also a giant flood. So it’s sort of like Noah meets Don Quixote.

In the story, Gilgamesh is the king of a city called Uruk. But he doesn’t do kingly things like issuing permits and dealing with zoning disputes. 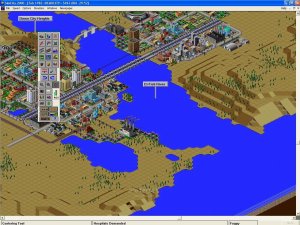 Gilgamesh would have been terrible at Sim City.

Instead, he gallivants around with his best friend, the beast-man Enkidu. They fight monsters and insult gods, and basically live the ideal B.C bachelor life.

Even the rich and famous can fall prey to their own behavior. Enkidu dies, sending Gilgamesh into a frenzy of grief and despair. Not for the loss of his friend, but for his own impending doom. It took the death of his friend for Gilgamesh to think about precious time flowing away.

This is something he should have considered before, though, because he spent hours every day grooming and braiding his beard.

The Costs of Style.

Unable to accept the fact that he too will die someday, Gilgamesh travels to the end of the world. There, he meets an immortal man, Utnapishtim, a survivor of The Flood. Gilgamesh pleads to be granted immorality, over and over. He is refused every time. Eventually, Utnapishtim becomes annoyed with Gilgamesh and sends him away with a plant that will supposedly prolong life. Gilgamesh thanks the immortal and begins his long journey home, but just before he arrives a snake steals the special plant and eats it.

Snakes are always ruining everything.

Deprived of his escape from death, Gilgamesh finally recognizes his fate. He will die, but still has many years yet to live, and decides to fill them with good deeds. He builds great walls around his city, and writes down his achievements. Even when he is gone, he will be remembered. People will speak his name and see Gilgamesh in his walls, and they did for a very long time. This is the closest anyone has come to immortality. At least without being in cahoots with ancient gods. 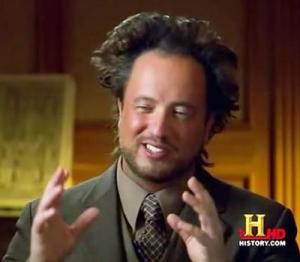 This guy will never move on.

III. Ragnar Lodbrock, or Lothbrock, was a Norse hero. He can be characterized as a cross between Odysseus and King Arthur, a semi-legendary king who has adventures on the high seas. And his name means “hairy pants.”

In the 9th century C.E. he sailed the North Sea, discovering new lands and ruining the breakfasts of British people. He was the harbinger of the Viking raids of the early middle ages. These raids would shape the future of Europe, and by extension, the world.

Today, Ragnar Lodbrock has his own show on History Channel where he buys and sells longboats in Las Vegas. 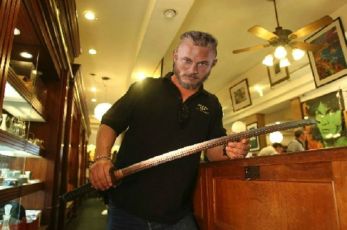 I’m Ragnar Lodbrock, and this, is my Pawn Shop.

Ragnar set out to create a vast Northern empire, but his life was cut short when his rival, King Aella, threw him into a pit of snakes. All British homes are equipped with a snake pit to this day, in order to deal with Vikings.

Ragnar had many sons, and they formed the Great Heathen Army and invaded England to avenge their fallen father. Later, each of the sons became a historical figure in their own right. They had great accomplishments, and even greater nicknames.

Ivar the Boneless led successful military campaigns and eventually became the de-facto king of Ireland. Bjorn Ironside brought Norse invasions as far south as Spain and the Mediterranean, ensuring no one in Europe felt safe during the age of the Vikings. And Ragnar’s son Sigurd Snake-in-the-Eye (again with the snakes) succeeded Ragnar as the King of Denmark.

Ragnar Lodbrock had a similar experience to Gilgamesh. He too feared and resented his own looming death, and went to great lengths during his life to defy it. Instead of building great walls, Ragnar set out to father many children, whose deeds would then be linked back to their progenitor.

Even after his death, Ragnar could take comfort in the knowledge that his blood would continue to flow through living veins, and that the achievements of his children, grandchildren, great grandchildren, and so on would become a part of Ragnar Lodbrock’s greater legacy.

Unfortunately for Ragnar, Gilgamesh, and all of us who wish to live forever through our legacy, things did not work out exactly the way the heroes had envisioned.

IV. There is an inherent problem with counting on a legacy to take your place after death. No matter how much we try and shape it during our lifetime, our legacy is always out of our control, because it is determined by other people. You can’t poke your finger up from the afterlife and say, “Hey, that’s not the way you’re supposed to be remembering things.”

“Will they remember me, or the statue?”

Gilgamesh’s story was lost for a very long time, and his walls have all but completely crumbled away. Though his name lives on, his achievements are gone, and his influence is diminished. Try to end a debate with, “According to the Epic of Gilgamesh,” and see how people react.

Even though we know the name Gilgamesh, the story is so old, fragmented and exaggerated that we’re not even sure the name was ever attached to a real king. Does it count as immortality if living people don’t believe you ever lived?

Ragnar Lodbrock faces a similar problem. The achievements of his supposed sons are, for the most part, historically verified. The evidence for a real Ragnar, on the other hand, is a bit sketchy.

Maybe a collection of brave Vikings achieved the feats he gets credit for, and they all live on together in the Ragnar character. That makes immortality sound less like a grand, palatial experience, and more like sharing a crowded dorm room. And the semester never ends. V. Short of biotechnical revolution, we will not defeat death. And this is probably a good thing. People who live forever, who just go on and on and on, will become hollow and go mad.

Yes, we can remain in a diminished form through our legacy, but that is not prolonging life. It is more like bestowing life on a new legend. It’s not worth spending our limited time thinking on our legacy, because it is out of our control.

All we can do is live. Do what we think is good, and even try to be great. Write a story. Raise children. Build a pyramid. Do everything you can, and then be glad when the time comes that you don’t have to do anything ever again.

← Cosmic Rock, Paper, and Scissors
Use and Misuse →

One thought on “How to Live Forever”