Harry Potter is a very popular series of books by J.K. Rowling. It is mostly about school, but also magic and magical artifacts. Lighting spells, flying brooms, transformation potions, etc.

In the series there is a class of magical artifact called a horcrux that is very important to the plot. A horcrux is an object that has a part of a person’s soul inside. It acts as a sort of insurance against death. Like a soul bank. If you are killed, but made a horcrux first, then a part of you will live on.

If you call this living

Horcruxes are bad, evil things for a number of reasons, but mainly because splitting off a part of your souls is a terrible thing. It requires you to do something terrible to achieve it. Something like murder. In order for you to make a horcrux, someone else has to die.

The villain of the series, Voldemort, created several horcruxes. Because that’s the kind of guy he is. Afraid of death, but not afraid to kill. Over the course of the series, we encounter all eight of Voldemort’s horcruxes. They are all different, ranging from books to cups to living creatures. But all of the horcruxes share similar characteristics. They all seem like they are alive. They will respond to questions, and try to preserve themselves.

In the books it is implies that the horcrux is ancient magic. Voldemort didn’t invent horcruxes. This means there are probably other horcruxes all over the place. Morbid curiosity and fear of death are not uncommon traits. We may even have seen another horcrux, one not created by Voldemort.

In Harry Potter and the Prisoner of Azkaban, Harry Potter receives a magic object called the marauder’s map. It is a map of Hogwarts, the magical school. The map shows every corridor and every secret passage, as well as pinpointing the location of every single person in the school. But the most remarkable thing about the map is that is responds to questions. And not just rote, preprogrammed responses. The map responds with personality. At times it seems like the map is alive. At times it seems like the marauder’s map might be a horcrux.

This is big, because it would not be an evil magical artifact created by a bad guy. The Marauders map was created by Harry Potter’s own father, as well as his godfather and favorite teacher. These were good guys who were messing around with dark magic.

We all go through phases in high school. It is possible that James Potter and his friends went through a distinctly evil phase. Most of us draw just draw weird pictures or write bad poetry when we feel weird in high-school. Witches and wizards have more options to express themselves. If the marauder’s map is a horcrux, then that means someone was murdered to create it.

James Potter, Sirius Black, and Remus Lupin all grew up and left their weird school days behind them. They became well-adjusted, productive citizens of the wizarding community. But the fourth friend involved in the marauder’s map, Peter Pettigrew, was clearly still disturbed by what he had done years later. The truth is, the other three probably made Pettigrew commit the actual murder. It was a horrible high-school prank!

“You can be our friend. If you murder someone.”

You are supposed to hate Peter Pettigrew. He caused the death of Harry Potter’s parents when he betrayed them to Voldemort. But if the marauder’s map is a horcrux created by Harry Potter’s dad and his friends, then the entire scenario looks a bit different. If the marauder’s map is a horcrux, it would raise a lot of questions. But if would also provide one definitive answer.

Peter Pettigrew never knew how to pick the right friends. 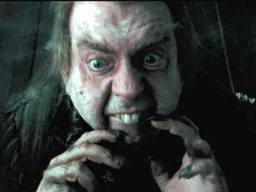 Be nice to weird kids, so they don’t grow up to be death eaters.

← Life and Level Caps
What Humans Leave Behind →

One thought on “The Secret Horcrux”